The installation of the Knights of St. John of Jerusalem on Malta in 1530 made the island the most important slave market in the Christian Mediterranean for almost three centuries (as late as 1797, on the eve of the arrival of Bonaparte, Muslims prisoners were still being sold at auction). This essay presents a quantitative and qualitative analysis of the Maltese slave market based on available sources: regarding those captured by religious orders these include the works of Bosio and Dal Pozzo, printed essays, and the correspondence of certain business assistants of the great master; regarding captives of the private corso, materials are from the rich archives of the Tribunale Armamentorum of La Valette. The paper attempts to answer the following questions: which slaves were bought and sold in Malta in this period? At what rate and under what circumstances? By which routes did they arrive on the island: direct capture (by pirates or from galleys of the Order) or through intermediaries? What were their ethnic (Turk, Moor, Jew, or other) and geographic (Maghreb, Arabian Near East, Anatolia, Romania) origins? At what price were they sold and according to what criteria: age, sex, ethnic origin, social class? What was the role of religious prisoners (who did not appear on the slave market because they were immediately put to work at the oar or held for a ransom)? The paper discusses the functioning of the market: its juridical, economic, and ethnic organization; its principal actors, suppliers, resalers, buyers (among whom we often find, aside from island inhabitants and knights, also representatives of the primary galley fleets in search of oarsmen); and finally we will try to analyze the place of this slave market in the local economy. We will not examine, however, the question of material and moral conditions. 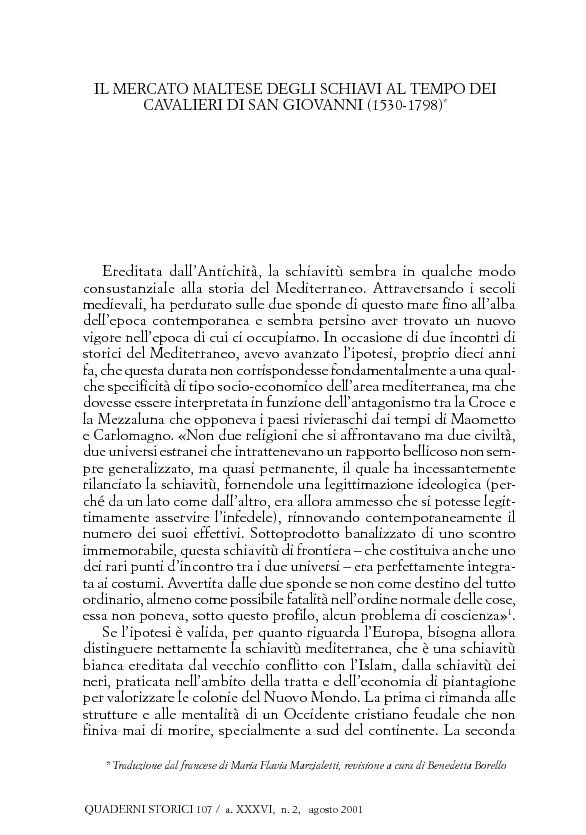