Traditionally, tramping-years ("Wanderschaft") were part of the life-course of central European craftsmen: a more or less short period of travelling to find employment in various places. This life-phase was officially dedicated to the improvement of technical and social skills of the young craftsmen. Even after the requirement to tramp was lifted in the 19th century, the majority carried on this tradition. Stories about tramping-years take an important place in popular autobiographies in the 18th and 19th centuries. The rereading of these texts shows however that the "Wanderschaft" which at first sight seems to be clearly determined by traditions, to be normatively and institutionally defined and protected was in fact open to various interpretations and ambitions. So "Wanderschaft" does not simply appear as a phase of training or socialization, but provides some scope for ambitions of distinction and rise in the world, which far surpass the bounds of a particular trade. The influence of various social and literary conventions and discourses affected the way craftsmen described their lives as well as their attitudes towards tramping. These patterns can be found in every detailed episode, for example in the description of arrivals in towns: in the perception of towns, in self-presentation, in descriptions of social contacts and work, and in the duration of the stay. The article attempts to develop a desubstantialising perspective in respect to what - beyond collective representations - single craftsmen contributed to the making of a trade. 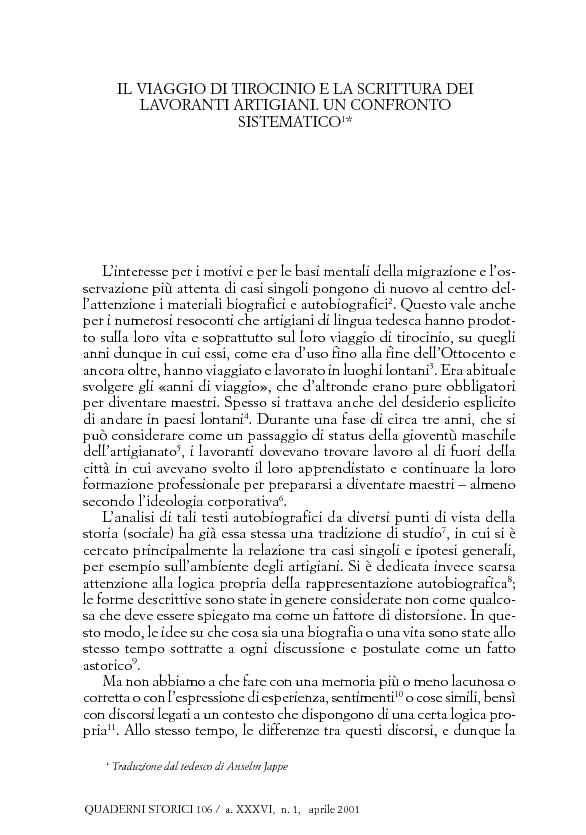