This article analyses the case of John Curtis, Jesuit missionary in nineteenth century Ireland, who in 1861 presented to the Holy Office of the Catholic Church a detailed project of education of midwives, doctors and priests about the baptism of premature foetuses. This originated a discussion in the Holy Office which involved concepts such as ensoulment and the definition of baptism, which appears interesting, because it was conducted in a periodo in which the position of Catholics on these points seemed to be homogeneous and defined. The original sources of the Archives of the Holy Office, letters of Curtis and instructions already circulating in Ireland and Great Britain and inquisitorial papers have been examined in the context of midnineteenth century Ireland. In this perspectives an attempt of disciplining Irish Catholics to the model of Council of Trent emerges, most of all in the politics of sacraments. The battle for proselytism in which catholic and Protestants had been involved for years appears as one of the motives of the Curtis initiative. In this some of the dynamics which involved pregnancy and birth are made apparent. On the other hand the implication of some of the most important concepts of catholic discipline of abortion, such as animation of the foetus and definition of baptism, have brought the analysis in the perspective of catholic discourse. The negative answer of the Holy Office compose finally an image of the catholic positions on these concepts that is more articulate than has previously been thought. 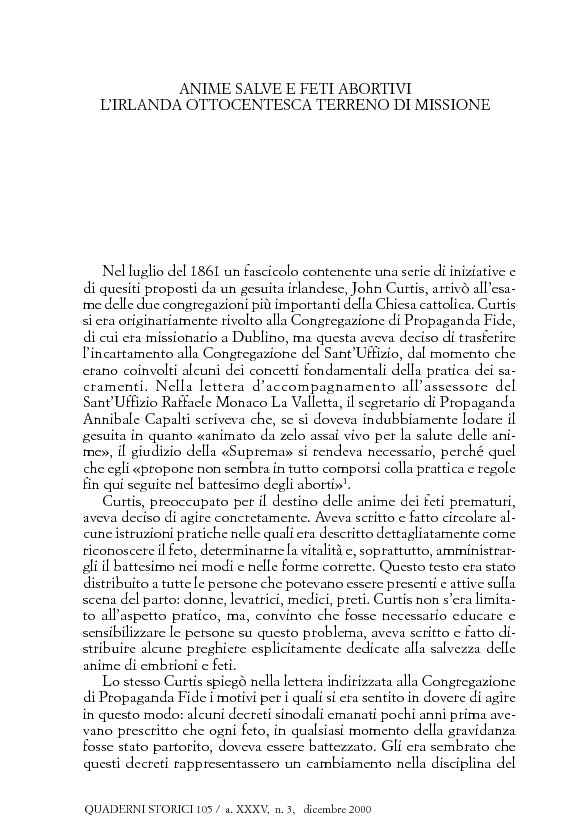