Scholars of French colonialism in Algeria are intimately familiar with what is known as «the Dispute» between the French and Algerian governments over possession of, responsibility for, and access to records produced by the French colonial state between 1830 and 1962. The removal to France of hundreds of cartons of archives in the last months of the Algerian War of Independence is one of the most notorious examples of what archivists term «dislocated» archives, the mass transfer of valuable or sensitive records that was a near-universal feature of decolonization across European empires. This essay furthers the investigation of the archives of French Algeria by exploring a body of records that blur the binary territorial frameworks of decolonization and the space of the national archive: the case files (dossiers de procedure) of trials transferred on appeal from colonial to metropolitan courts and archived by the sentencing jurisdiction. Focusing on the example of the 1901 Margueritte uprising, which was transferred from the Cour d’Assises d’Alger to the Cour d’Assises de l’Hérault in Montpellier, this article considers such cases an example of «judicial delocalization» with archival effects. The resulting «delocalized», rather than «dislocated», archive was shaped by the movement of people and paperwork between colonial and metropolitan jurisdictions facilitated by Algeria’s physical proximity to the metropole and its unique status as a settler colony constitutionally assimilated to France. 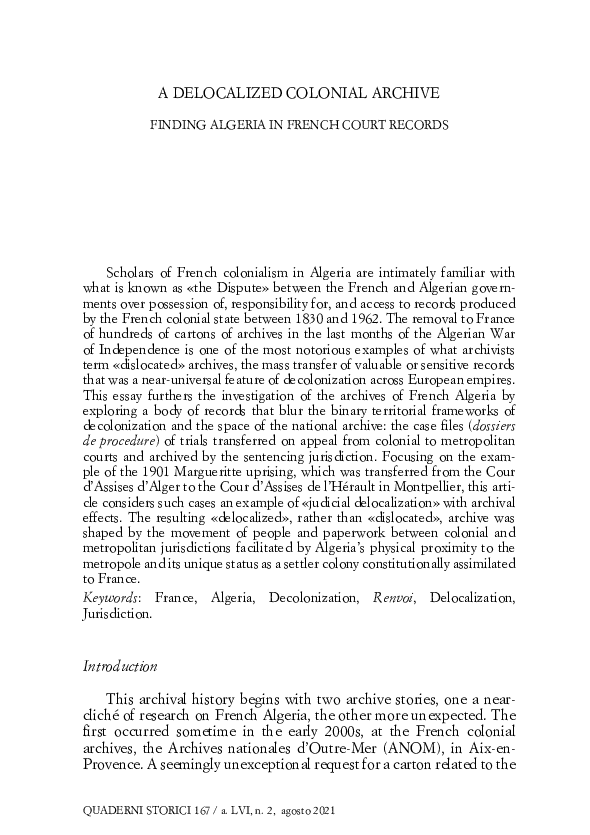