This essay is concerned with widow's "patronage" in the city of Bologna, perhaps one of the most interesting of italian cities for the study of widows, since they left a strong visual legacy, demonstrating the conspicuous role widows played in the social and cultural life of the city. Perhaps the most interesting and remarkable aspect of widows' "patronage" relates to the altarpieces which commemorated and recorded the widow's own personal life in narrative strategies, informing the viewer about their societal status, their family life, patron saints to whom they were dedicated, or the religious and social causes they espoused. Such altarpieces became a theatre where their widowhood could be viewed and reflected upon by the spectator. Raphael painted the "Ecstacy of Saint Cecilia" as the altarpiece for Elena Duglioli Dall'Olio's chapel in the Church of San Giovanni in Monte. Significantly, this painting can be seen to have influenced several altarpieces commissioned by other Bolognese widows, like Ludovico Carracci's "Madonna dei Bargellini" painted for Cecilia Bargellini Boncompagni. Their image and their images permit an unparalleled opportunity to uncover the multi-faceted identity of widowhood which serve to transcend the passivity of grief and the simple recognition of loss. 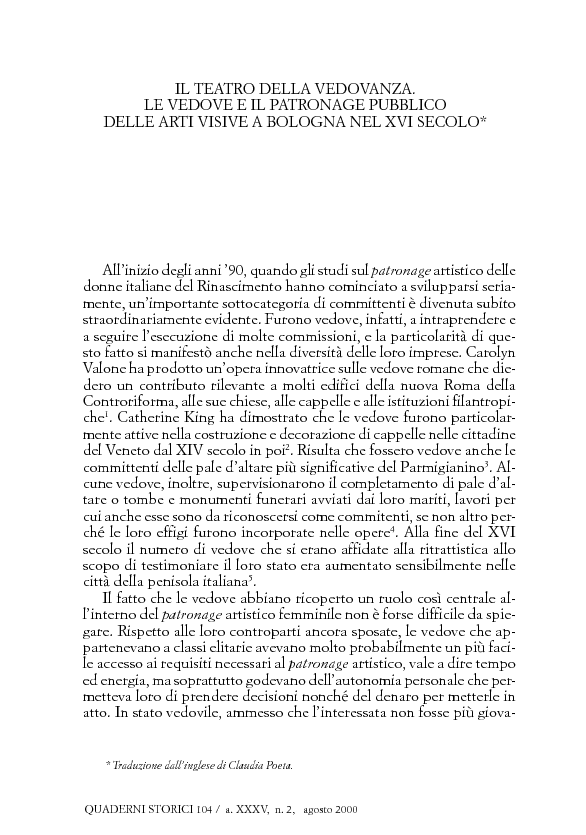