While a number of recent studies have sought to recuperate the role of noblewomen in the court culture of renaissance Italy, little attention has been given to the significance of their close ties to the Neapolitan court. An extraordinarily high percentage of these women were either Neapolitan themselves or directly related to one of the principal noble families of Naples by blood or marriage. The example of the Neapolitans for other Italian noblewomen was particularly important since the unique political situation in the Kingdom of Naples permitted women to succeed to the throne. Much can be learned from a careful examination of the lives of two Hispano-Neapolitan noblewomen, both named Eleonora. In spite of the fact that one lived in the fifteenth century, Eleonora d'Aragona, and the other lived in the sixteenth, Eleonora di Toledo, the two women seem to have led remarkably similar lives, engaging in comparable aspects of rulership, financial investment and artistic patronage. Periods as acting heads of state combined with access to vast financial fortunes provided the two Eleonoras with both motive and opportunity to engage in significant acts of artistic patronage. The affinities between their activities suggest that these should not be considered exceptional; on the contrary, these similarities provide an opportunity to reconsider which responsibilities would have been expected of noblewomen at courts throughout renaissance Italy. 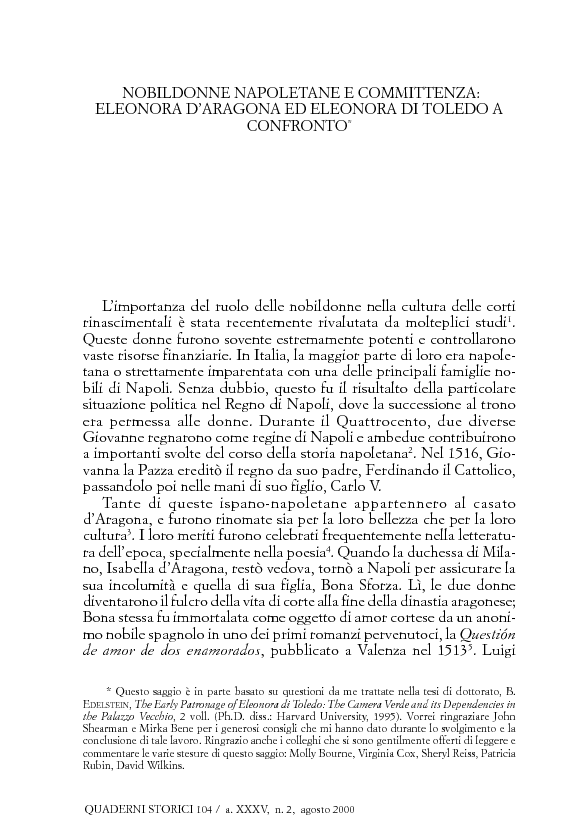