In the Florentine society of the Late Middle Ages, where the ideology of patrilineal lineage and the dotal regime largely dominated, the place of residence, filiation, inheritance rules, transmission of names, and possession of property delineated a family horizon that included mainly the male members among blood relatives and left little room for women who entered and left the house or for relatives acquired through marriage. However, we know the usefulness that Florentines recognised in the construction of matrimonial alliances – parentadi – and the extreme attention they paid to the choice of these parenti. But the affini – Florentines refer to in-laws as parenti – almost never cohabited with the family of the woman to whom they were related, they were not among her potential heirs, and the bonds that were forged during marriage could be undone very quickly, often leading to conflict and resentment, especially when the husband’s death put an end to the couple and often left a young widow with her dowry to be recovered. In fact, the in-laws – the parenti – also occupy little space in Florentine family diaries except when the author described the different phases of the construction of the marriage alliance or its dissolution, rituals and conflicts. But they do not disappear completely and it may be interesting to try to discover evidence they have left behind. 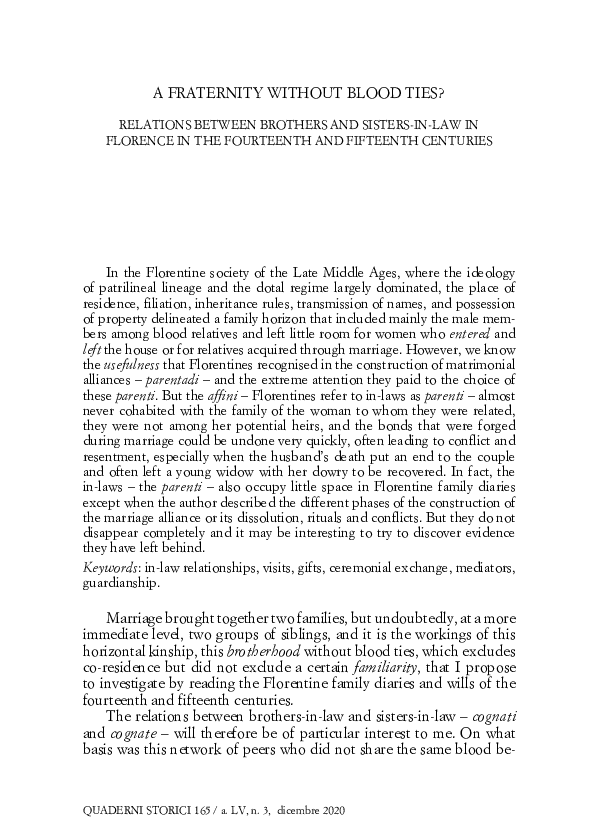