Among Italian "ancien régime" cities, Livorno constitutes a special case: the city was founded in 1575 in order to serve the port, and enlarged in order to create a merchant quarter - completing imposing hydraulic works - after the edict of 1676 made it a free port of trade. The houses were built within the fortified bastions on the property of the Grand Duke and made available in the first phase (1590-1630) in such a way as to encourage an inflow of population. Thanks to population growth there were 12.000 inhabitants in 1642, and the houses were involved in a process of privatisation and "improvements" (new floors and internal partition were added) in order to obtain good rental income. The analysis of notarial records and of the "Decima" (a kind of cadastre) on rents instituted in 1646 shows that in Livorno foreigners, including Jews - who were allowed to possess private property - were not confined to particular areas; there was no church property and private property underwent a rapid division into apartments. Only at the end of the 17th century, merchants, for many years tenants of Livornese landlords, built their own "palazzi" or town houses which, although they represented an important step in the social affirmation of their owners, included both warehouses for the merchandise and apartments to be let. Nonetheless the State maintained - although in market situation - control over a part of the real estate and managed the land and the houses so as to keep prices down, encouraging population growth and the settling of merchants. 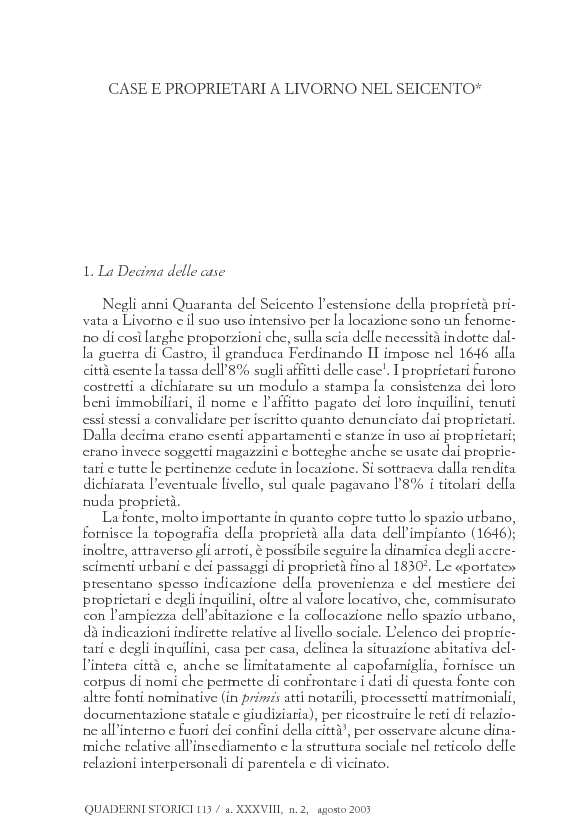