What does it mean to read Foucault in our post-colonial time? It means above all to read him critically, because the post-colonial condition is the permanent condition of critique. However, for Foucault the critique was a matter of self-transformation, while for the decolonized societies it is still a matter of collective transformation of society. Even though Foucault contrasted between a command-based ethics and ethical practice leading to formation of self, this was not adequate for constituting collective resistance to authority and power. On the one hand, Foucault's argument is relevant to the experiences of the post-colonial era, to the extent that this argument tells us how the phenomenon of governmentalization enters into the very practices of those who are being governed, into their very ways of knowing, and in short into their ways of being. On the other hand, this argument does not tell us how the subject embarks on the social practice of criticism so that the truth of power can be questioned, and critique can thereby become a material reality. Therefore, the other question that this essay addresses is: in this post-colonial milieu what will now happen to philosophy that is philosophy in the way Foucault wanted to practice it? He wanted philosophy to cross the line of grandeur and enter the place of immanence, and become in that way endurable, workable, and thinkable. In that sense he did what Althusser had termed as «philosophical practice», because «philosophy is a certain continuation of politics». Therefore notwithstanding how he reached India, or, precisely because of the way he reached India, radical post-colonial political thinking will keep him as a resource. 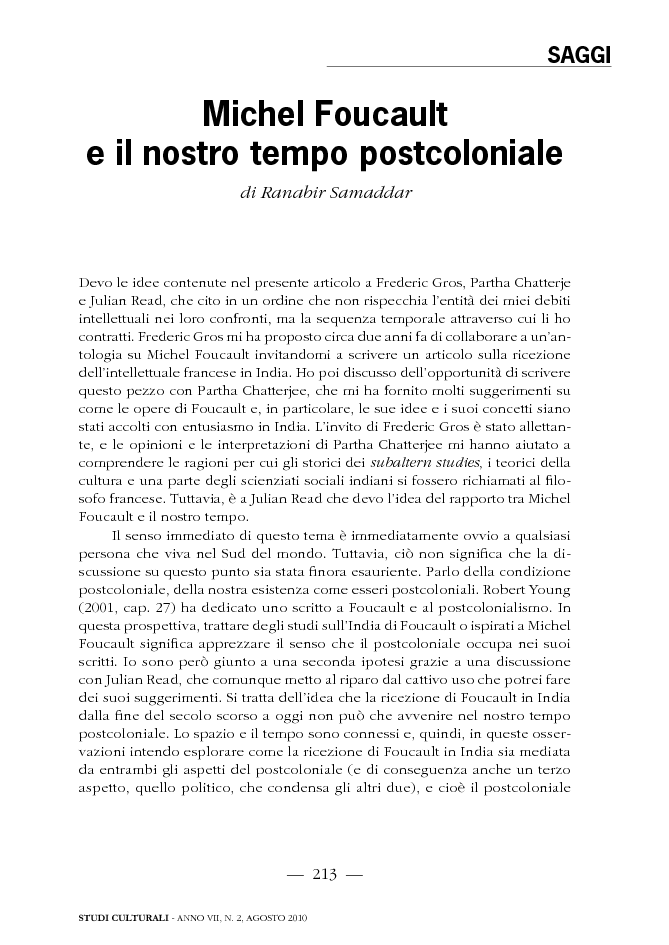