The article focuses on the spread of cakewalk in the United States and in Eu¬rope at the end of the 20th century. Beyond its banal vulgarisation as a "dance fever", the phenomenon of the first black dance, the whites wanted to learn how to dance, is analysed as an intrinsically political phenomenon. Born as a black parody of white dances - a simulated rebellion against an exclusivist and dominant order - and misunderstood by whites as an inferiority or incapacity of blacks contradictory practices of "making-white" and "becoming-black" it con¬tinued even when, having moved within the "Black Atlantic", the dance arrived in Europe. At this level, the old route of the colonial commercial triangle was no longer a preordained and immutable reality, but a vortex able to transform in unpredictable ways the factors in play. Arming herself with archive sources including newspapers, postcards and films from the era, Kusser delineates the European reception of cakewalk as a complex and contradictory process, involving the agencies of dancers, bodies and images alike: alongside mere imitations of a still colonial matrix (amongst which performances in "blackface" stand out), there were experiences of appropriation of this black dance by European dancers which in fact broke apart the rigidity of colonial categories. Whilst totally different from Afro-American society, there was an equal need for European society to carve out new spaces of freedom for itself, something that it found in the cakewalk. 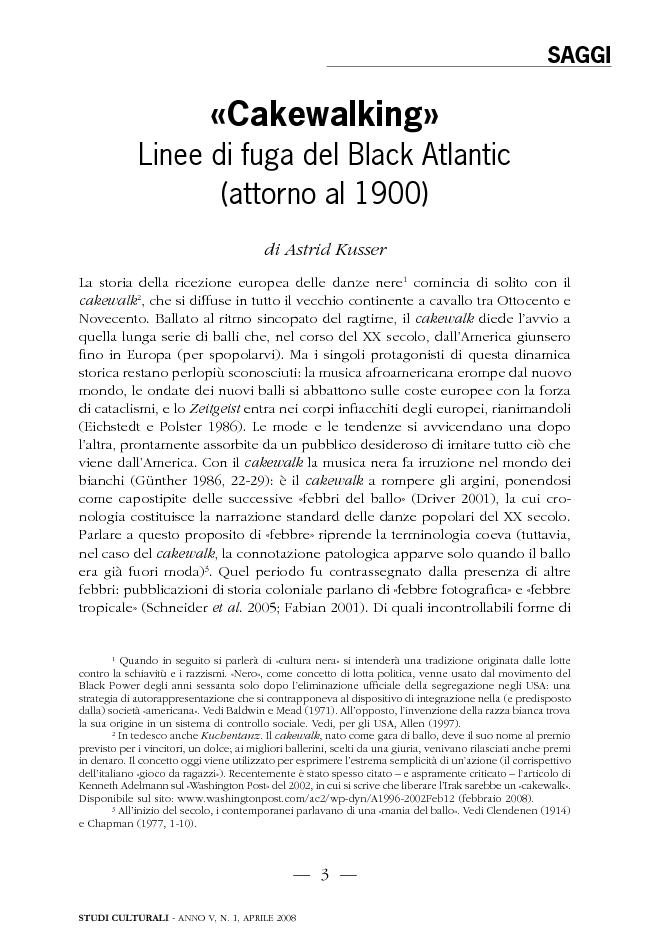