As soon as Hitler and his followers had seized power in 1933, the new government then issued the necessary regulations to purge the public service and to dismiss civil servants, especially those with Jewish, Communist or Socialist backgrounds. The majority of the German university professors belonged to the tenured staff but were nevertheless affected by these measures. Erich Auerbach was then full Professor of Romance Philology at Marburg University and was one of the most prominent representatives of his discipline. However, since Auerbach had served in the German army during World War I, he was therefore initially spared dismissal, but in 1934 he was consequently removed from his position. He shared this dubious destiny with 1684 other university members. When Leo Spitzer, Auerbach's predecessor, had given up his teaching post at Istanbul University in Turkey, where many German refugees had found shelter, Auerbach was then invited by the Turkish authorities to succeed him. He remained in this position until 1947, when he moved to the United States, teaching initially at Pennsylvania State University and later as full Professor at Yale University. The present article describes in detail the political and pseudo-legal background of Nazi racial politics through the example of Erich Auerbach. 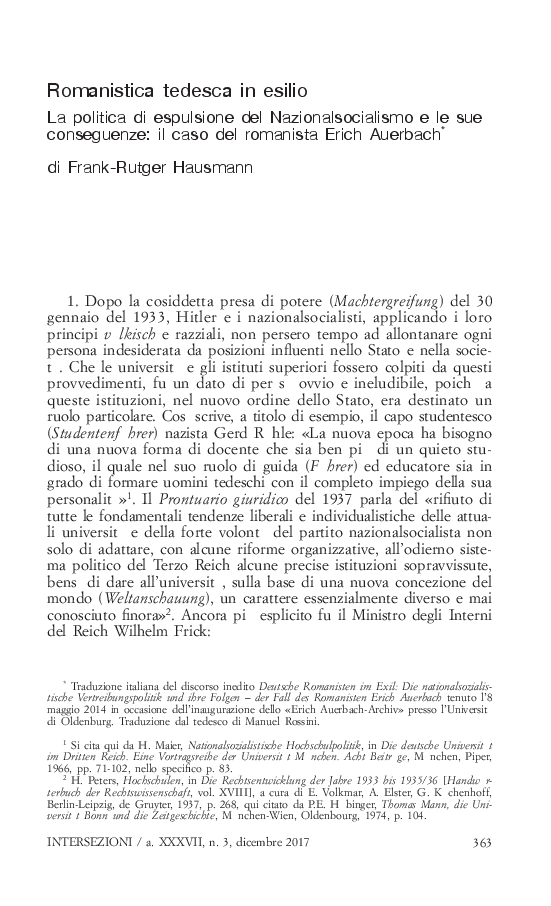