The article aims at following the transformation of the concept of glory at the turn from the Seventeenth to the Eighteenth century, by analysing the thoughts of Francesco Algarotti (1712-1764). He was trained at the Bolognan scientific school of Eustachio Manfredi and of Francesco Maria Zanotti, art collector, traveller and reader of Machiavelli. Algarotti devoted some of his Discorsi militari (1764) to the protagonists of the wars which were throwing Europe into disorder. Quick biographies, written in the brilliant style of the journalistic reportage, welcome to the reading public of the time. The research analyses the speech which deals with Charles XII of Sweden. The discussed king incarnated for his contemporaneous not only the role of the warrior hero, but also that of a 'Don Quixote', unable to come into the play of the political alliances for the welfare of his people. In the intersection of official history with novelized narration, Algarotti converses with Voltaire and writes a sample of the anecdotical genre, which in the Eighteenth century was aspiring to achieve the title of reliable source, by showing the private (and therefore more genuine) aspect of rulers and politicians. 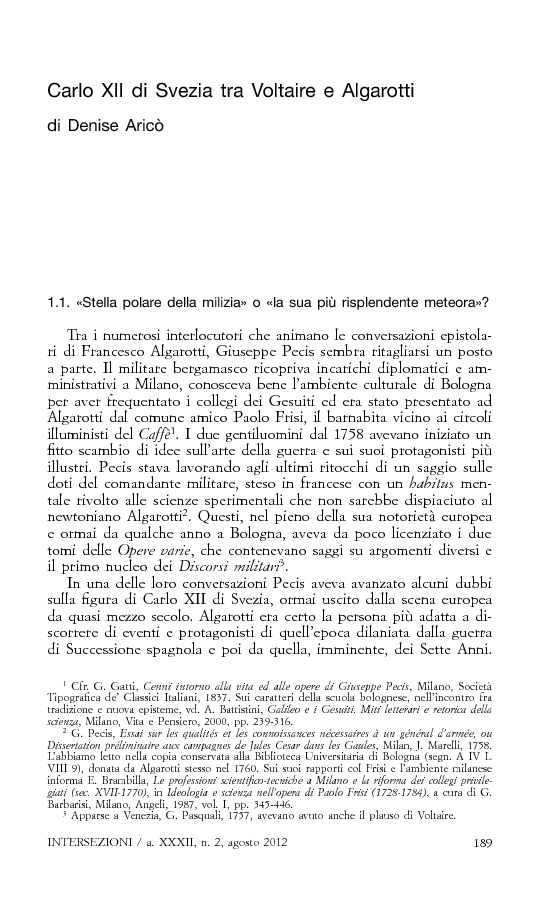