At the beginning of the 17th c. the Epic Poem was still considered one of the highest literary genres. The Epic poet was required to possess wide knowledge, to labour hard, to have much time and an ample library. All of these were rarely avail- able to women. Therefore, an Epic Poem written by a woman was a monstrous fete, and was received by its readers with the surprise and the caution. The juxtaposition of a literary genre traditionally masculine with a subjective female narrator could only cause tension in the text. In fact, the authority of the woman as narrator clash- es with one of the negative codes typical of the Epic poetry: the sub-categorisation of females. The consequent contrast invades the structural and conceptual rigidity of the poem: it penetrates its narrative, destroys its coherence and creates tension in its plot. This theory is here illustrated through relevant passages in La Scanderbeide, an Epic poem by Margherita Sarrocchi (1560?-1617). Sarrocchi's ekphrastic descriptions are here analysed in particular detail as they show how a usual Epic topos develops through this narrative tension in an unusual manner. Moreover, the study of the ekphrastic descriptions allows the author to comment on the relationship between imitators and models, between the creation of canons and literary practice and finally between gender and genre. 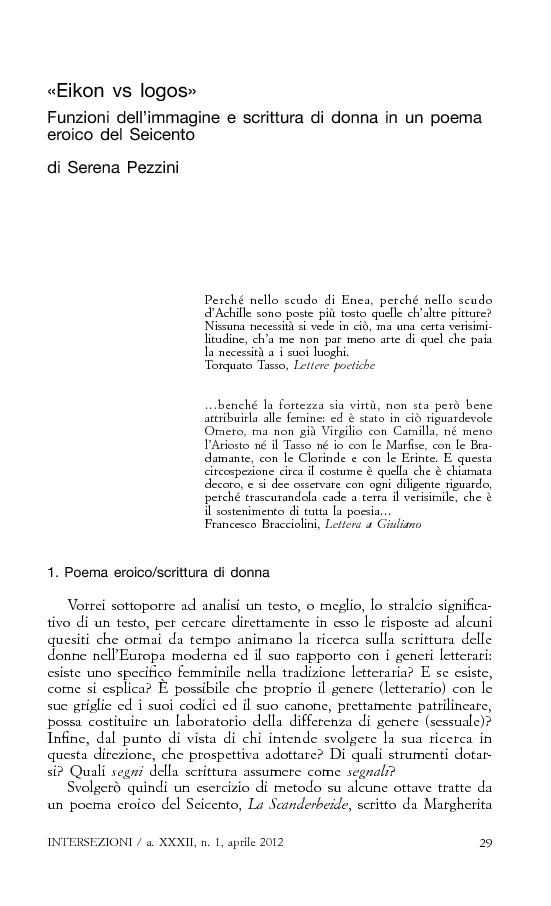