Ernst Bloch conducted an important analysis on the history of philosophy, in order to identify the utopic thoughts of the past, which needed to be rediscovered. These thoughts, together with other forms of human creativity, are fundamental to identify the real possibility to achieve utopia. This article aims at analyzing the complex relationship established by Bloch with Kant, in order to understand the developments of Bloch’s doctrine. Notwithstanding the eminent importance of Hegel’s legacy, Kant’s one is by no means irrelevant in the Blochian philosophy. Therefore, an accurate analysis can clarify some turning points of Bloch’s philosophical evolution. Critical studies have often argued that Bloch always esteemed Kant’s practical philosophy, thanks to its manifold “utopian tracesµ. Nevertheless, a more severe judgment about Kant may be shown by an accurate investigation, especially of the Leipziger Vorlesungen. At first, a remarkable impulse to the utopic transfor- mation is seen by Bloch in Kantian Sollen, in contrast with Hegelian panlogism. However, after his adhesion to Marxism, Bloch’s appraisal became more severe. To conclude with, my research will focus on the main reason of this change, which could be found in the dependence of the epistemological and ontological principles on the ethical ones, which instead are very independent in Kant. As a result, only the Kantian reflection about history continues to be appreciated. 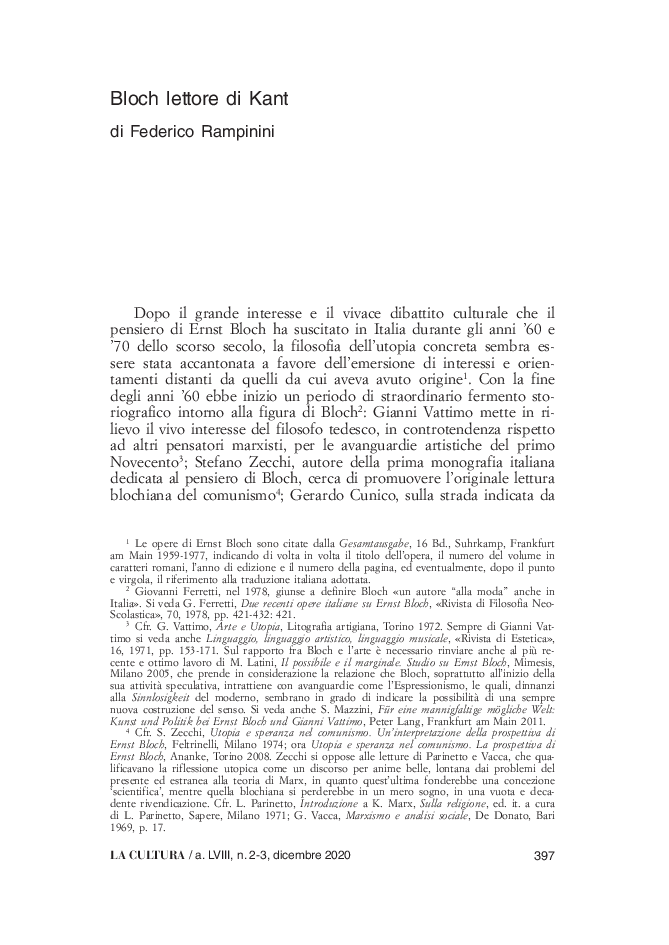