It is well known (and several times studied by the author in his philosophical essays on Italian Idealism in the nineteenth century) that between November 1913 and January 1914 a philosophical dissent involved Benedetto Croce facing to Giovanni Gentile and it was expressed in the form of a public discussion published in the Italian journal "La Voce", directed by Giuseppe Prezzolini. The public debate was also accompanied and continued by the two philosophers, in the private form of their personal correspondence. Taking occasion from a new source - a letter from Gentile, dated the 3rd December 1913, for the first time in course of printing in the Italian edition of B. Croce and G. Gentile, "Carteggio", iv. (1910-1914), Aragno, Torino 2019 and in this article reproduced - Sasso comes back to the origins of a new sort of historiographical polemic, introduced in 1950 by a Gentile's scholar, Ugo Spirito, focused on the evaluation of the prominent role, which should have been attributed to one or other philosopher in shaping a proper form of a new philosophical thinking, which would have been later distinguished in two perspectives, that is Croce's Historismus and Gentile's Actual Idealism. In this article the author realizes a full reconstruction of underlying reasons and motions, which caused a delay in publishing the precious correspondence maintained by the two major Italian thinkers (and till now at disposal of the readers as Croce's and Gentile's separate Epistolary). The author also gives minute proofs and assumptions about the recent find and will propose the intellectual debt that each of the two thinkers entertained to the other, as a more instructive way for interpreting and criticizing the Italian philosophy. 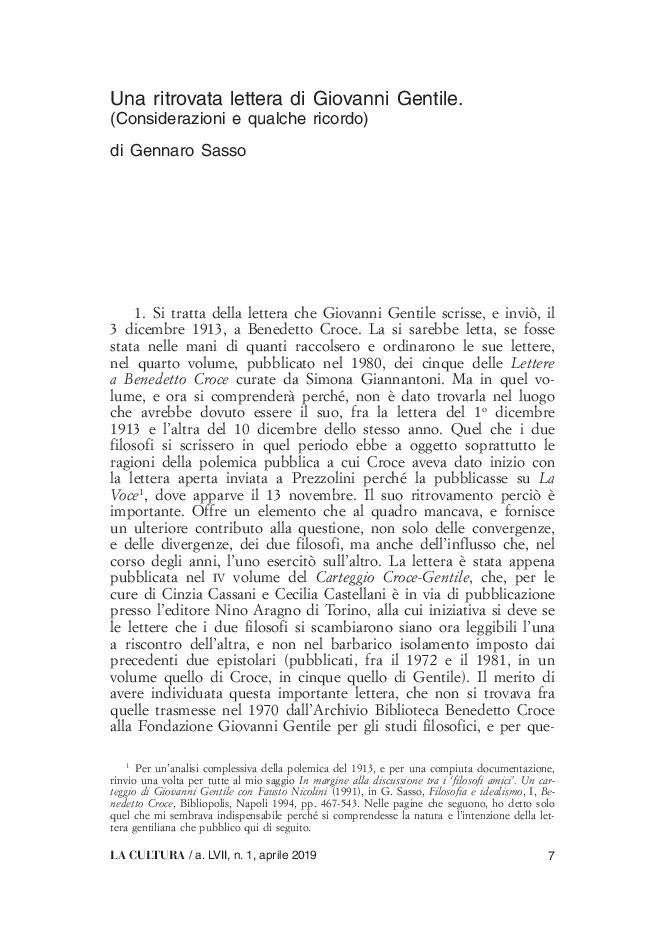