Recently, several studies of neurolinguistics, neuropragmatics and/or clinical pragmatics on schizophrenic discourse have tried to focus attention on the so-called «domain of language». In fact, some researchers of these scientific fields believe that pragmatic schizophrenic deficits cannot be fully explained by referring only to cognitive disorders such as those in Executive Functions (EF), Theory of Mind (ToM), and/or Formal Thought Disorders (FTD). The difficulties in figurative language, in the expressions in which it is necessary to understand and produce the ironic or sarcastic sense of the sentences, the poor skills in understanding sincere or deceptive communicative intentions and, more generally, the difficulties in inferential skills would demonstrate a specific deficit of the pragmatic abilities of schizophrenic subjects. Using also statistical models for reading the results, a series of cognitive pragmatic research where semi-structured interviews, reading and understanding exercises of short passages, questions on sentences presented experimentally from which the meaning must be inferred (literal, figurative, concrete, abstract), or interpreting illustrations and stories have been used, seems to demonstrate that in schizophrenic discourse important deficits in the domain of pragmatic abilities would emerge. However, to explain the lack of coherence, cohesion and/or relevance of schizophrenic speech, or the failures of the patient’s discursive performance, it is also necessary to recover the cognitive role of the Formal Thought Disorders and above all of the delusions and hallucinations. In this regard, it is still useful to consider the psychopathological perspective, and in particular the study the patients’ many autographed productions (letters, complaint, memorandum, narrative and poetic compositions, etc.). The examination of these writings and/or the transcriptions of the psychiatric interviews could allow us to better evaluate the adequacy to the communicative context of these subjects, and allow us to integrate their delusional and hallucinatory linguistic uses. In short, from these studies the role of the particular schizophrenic communicative context could emerge – or of the subjective, imaginary and unusual context (precisely, delusional and hallucinatory) – which seems necessary to integrate the pragmatic dimension of deficits of schizophrenic language. 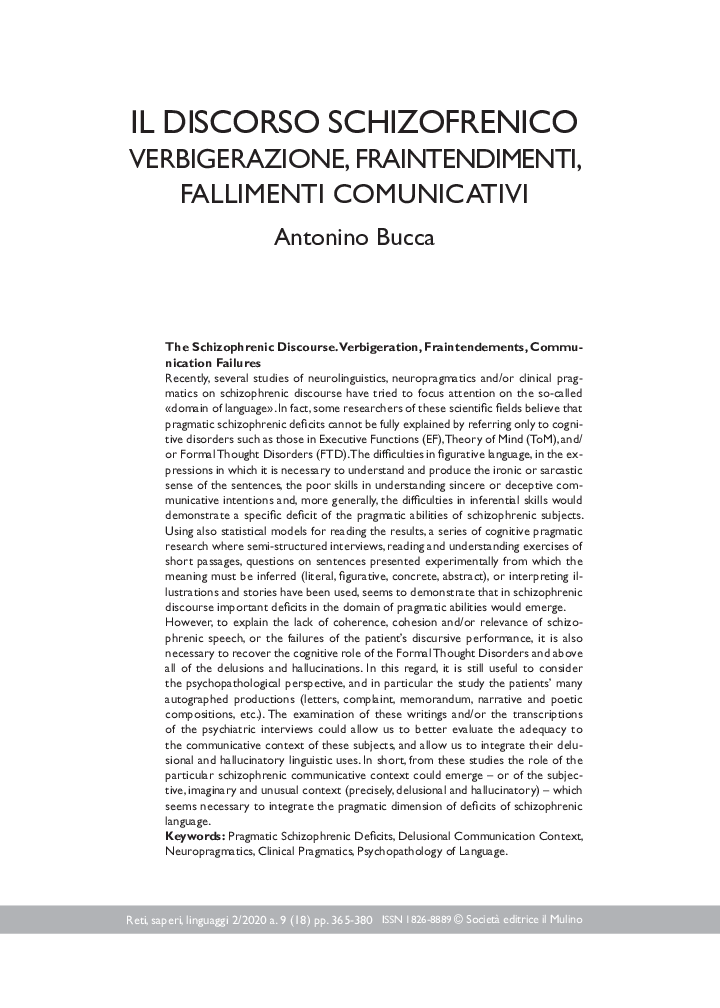