Pragmatics is a matter of linguistic understanding. Therefore it has to deal with the metaphorical process implied by communication, of which it highlights the culturally marked aspect. Pragmatics, indeed, is the best example of the language's semiotic dynamics, where signified and signifier are only mental activities, independent from the reality and its ontology, and where a cultural line, wrapping up the human imagination of the world, dictates the shapes of the truth shared by a society. As Saussure (1921) demonstrated, and the modern cognitive psychology (Rosch 1973; 1977), acknowledged by the cognitive linguistics (Lakoff, Johnson 1980; Lakoff 1987; Johnson 1987; Langacker 1991; 1999), confirmed, the relationship between signified and signifier of a linguistic sign is fixed only by the value which a culture assigns to it in a contingent historical dimension. Thus, the value becomes a metaphorical product of thought, culturally shaped, and accessible through a competence which is mainly pragmatic. The cultural shape is a set of values, and acts as a cognitive frame (Fillmore 1976; 1982), which admits only compatible meanings. To learn a language is to learn the historical typology of metaphorical thought and to acquire the automatic approach to its linguistic means. Learning pragmatics is learning the cultural value of such typology toward the frames. The process is natural in first-language acquisition (Chomsky 1965; 1986), and leads fundamentally the adult linguistic behaviour (Bloomfield 1933). Learning pragmatics in second-language becomes a natural procedure only if it follows the same implicit strategy. Interpreting and describing this strategy is the very challenge for pragmatics. The article puts forward some proposals. 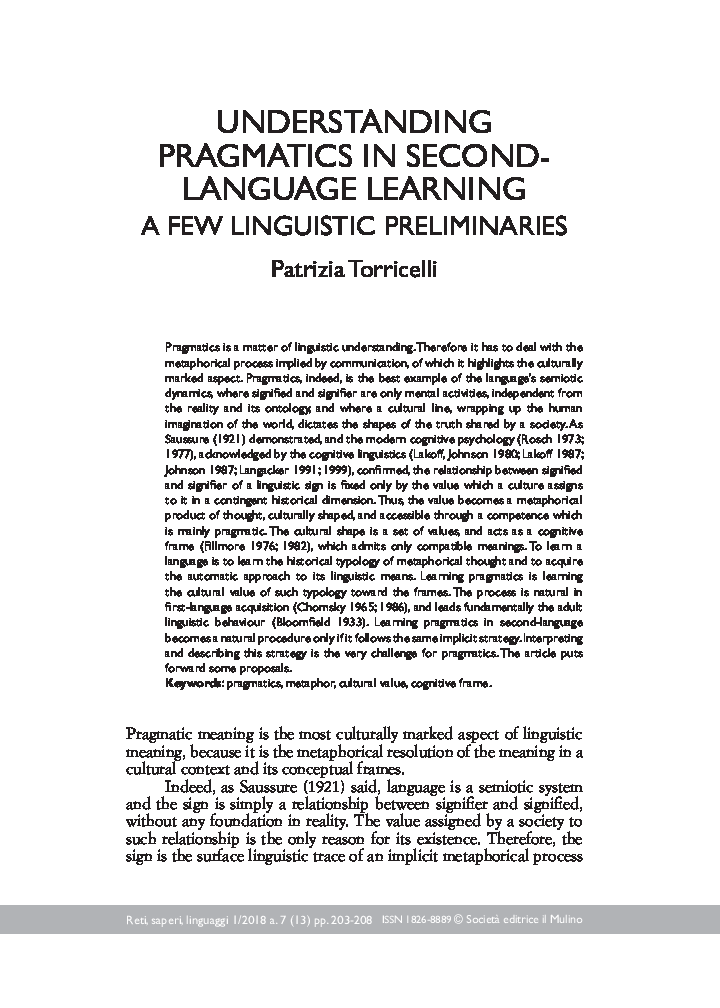