We live in an age of radical changes brought about by digital technologies, not only in the material aspects of communications but also at an epistemic level, which are affecting the very ways in which human knowledge is produced, expressed, distributed, shared, archived and transmitted. Within this scenario, the theater and the performing arts are bound to play a crucial role, even though in different and uncommon ways, as compared to how we are used to understanding and practicing them. Without ignoring the pressure to rethink what knowledge is from the point of view of digital technologies, it is my opinion that theatre and performance, as practices as well as academic disciplines, will now revaluate mimesis as a fundamental way of knowing - but in a kind of pre-Platonic and post-modern sense of the term. Three decades after his first essay concerning the points of contact between theatre and anthropology, Richard Schechner has recently returned to these arguments in an essay where he discusses some new points, listed under three major headings: embodiment; the sources of human culture are performative; the brain as a performance site (Schechner 2015). It seems to me that the thread which connects these three headings can indeed be called mimesis restored, which in my opinion has a double meaning. First, a re-instatement (or recovery) of an ancient, archaic, and pre-Platonic meaning of mimesis as «the total act of poetic representation», and not as imitation - that is, a «copy of...» as in modern aesthetic thought. Second, a strong convergence of this recovered meaning of mimesis with the «restoration of behavior» as the basic mechanism of the performing arts. These two meanings lead to an appraisal of live performing arts as a «way of knowing», since - as Diana Taylor pointed out - «[b]y taking performance seriously as a system of learning, storing, and transmitting knowledge, Performance Studies allows us to expand what we understand by "knowledge"» (Taylor 2003, 16). I try to provide evidence to support my opinion by making use of the work of three scholars, who have focused their studies on the notion of mimesis in different ways: Walter Benjamin's concept of «mimetic faculty»; Eric Havelock's analysis of Platonic refusal of mimesis, and neuroscientist Merlin Donald's theory of the evolution of the human mind, in which he locates a pre-verbal stage named «mimetic culture». 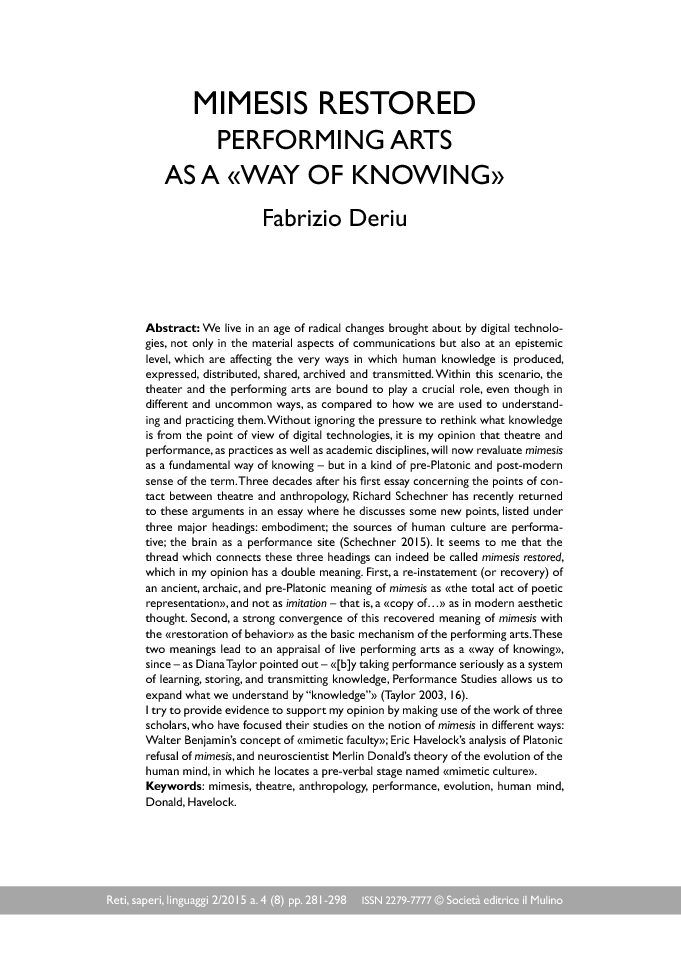