Although I have written several articles and chapters introducing theatre and performance studies scholars to the cognitive sciences, this will be the first time that I have invited cognitive scientists to meet the field of performance studies. Of course some of this introductory work necessarily overlaps; both cognitive scientists and performance studies scholars will be aware that the «cognitive turn» in the sciences and humanities has created a range of epistemological and method¬ological confusions and opportunities shared by all fields of knowledge. While these mutual problems and possibilities should logically bring us together, suspicions of «the others» continue to separate social scientists, humanists, and scientists. My major purpose in writing this essay, then, is to underline our many commonalities and point up opportunities where we can work together in what I will define as the biocultural field of performance studies. I have divided this Focus essay into three parts. In the first section, I will outline the distance researchers and scholars have travelled since the days of C.P. Snow's «Two Cultures» and summarize where the cognitive revolution has left performance studies, a field of knowledge that began in the 1970s and, in significant ways, remains committed to methods and epistemologies that pre-date the cognitive turn. In the longest section of this essay, I will demonstrate that the «proto-paradigm» of enaction is probably the best epistemological option for the reconceptualization of performance studies in the light of our new knowledge. Finally, in a brief conclusion, I will suggest that we pursue a general area of empirical research in performance studies grounded in the principles of enaction that could benefit all of us. I have adapted most of this essay from sections and excerpts of my "Evolution, Cognition, and Performance", forthcoming in hardback and paper from Cambridge University Press in January of 2016. 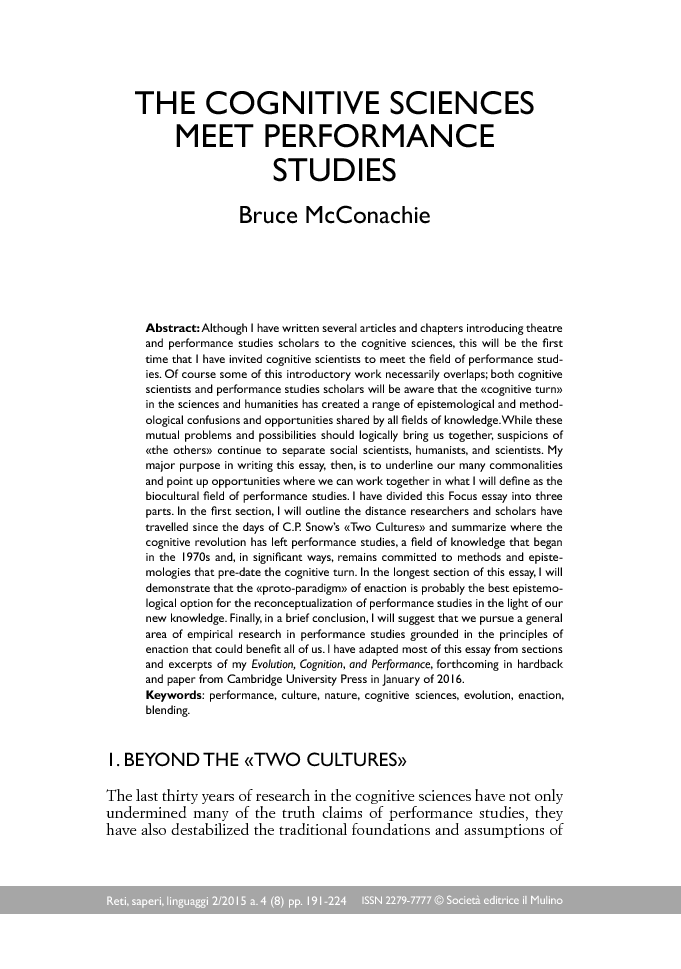