The first part of the article will briefly describe the scientific history of a syndrome that broke into European medicine in the late nineteenth century as the most severe case of melancholy (Cotard, 1882; Cotard et al. 1997; Salerno, Ferro 2005; Mazzeo, 2009). The second part will give an account of the scandal represented by a disturbing symptomatic clinical picture. The patients suffer from a syndrome that shortly afterwords will be also known as the «delirium of negation» as they deny their own existence: «age», «name», even being «born», by opposing «everything they are asked to do» (Cotard, 1882, p. 26). Through the analysis of school cases and the most recent studies, we will try to shed light on a clinical overview that is being currently studied from several perspectives: psychiatric (Nejad, Toofani 2005; De Berardis et al., 2015), neurological (Gardner-Thorpe, Pearn 2004; Kudlur et al. 2007) and philosophical (Young, Stone, 1997; Gerrans, 2000). The third part of the essay will propose a philosophical hypothesis: the syndrome dramatically shows the suspensive semantic power of verbal negation (Virno, 2013) and its syntactic relationship with the interrogative sentence (Haegeman, 1995). From this perspective, Cotard’s syndrome will be considered a powerful as well as paradoxical demonstration of the embodied character of negation. By making itself flesh, the «not» denies the flesh. 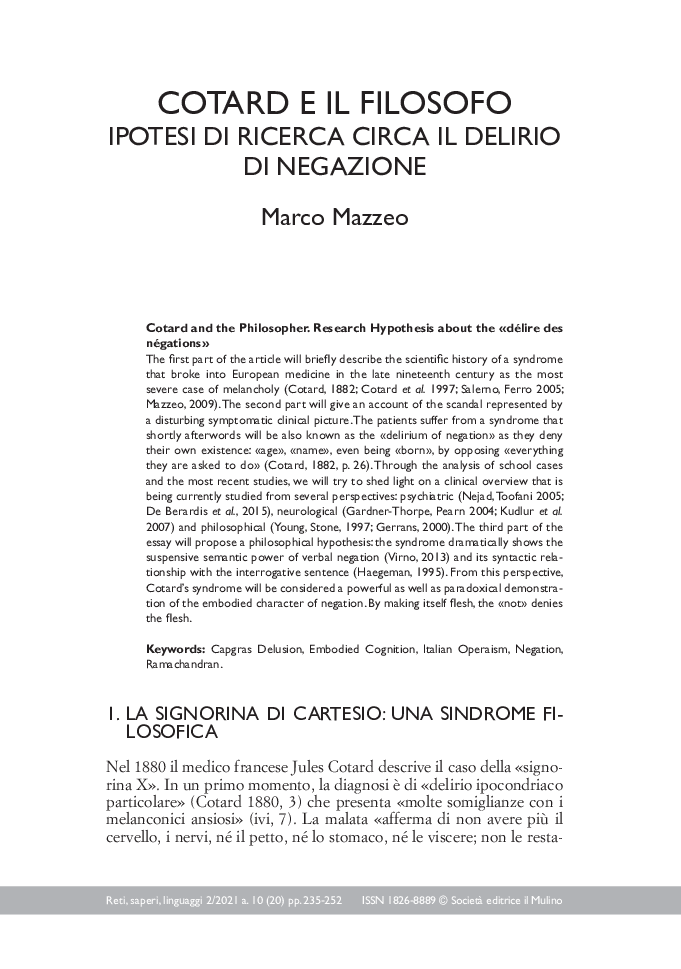