In this paper, I suggest deriving a conception of human sensibility from John Dewey: more specifically, from his strategy of shifting the field of reference from a representative view of cognition to organic life within an environment. From this point of view, human sensibility can be understood as selective exposure to the environment and an active feeling capacity to discriminate between favourable and noxious aspects by organisms whose primary experience of the surrounding environment is socio-cultural. This happens because of the organic conditions of emphasized dependence from a natural and naturally culturally shared environment characterizing the human form of life. This means that the conception of perception as skilled action involving movements and dynamism from its very beginning – a conception worked out within the enactivist field and independently envisaged by both John Dewey and Maurice Merleau-Ponty – should be integrated. The mutual coordination does not occur between a still eminently senseoriented perception and movement, but between an affectively oriented perception and movement. Consequently, a fully embodied and embedded conception of sensibility should be assumed as the affective capacity to discriminate living conditions as comfortable or menacing, as friendly, welcoming, annoying or troubling, as good places to live or bad situations to escape from. Roughly speaking, embodiment and affectivity should be assumed as the two intertwining sides of sensibility: in other words, sensibility should be seen as involving «primordial affectivity», which Giovanna Colombetti defines as a necessary and non-contingent feature permeating the mind. Finally, I argue that we should tackle the issue of the specificity of human sensibility, which is to say its being embedded in a deeply social and cultural-linguistic niche from birth. We should consider the feedback actions or loop effects on pre-verbal animal sensibility exercised by the cultural-linguistic niche in which humans are fortuitously but irreversibly embedded. 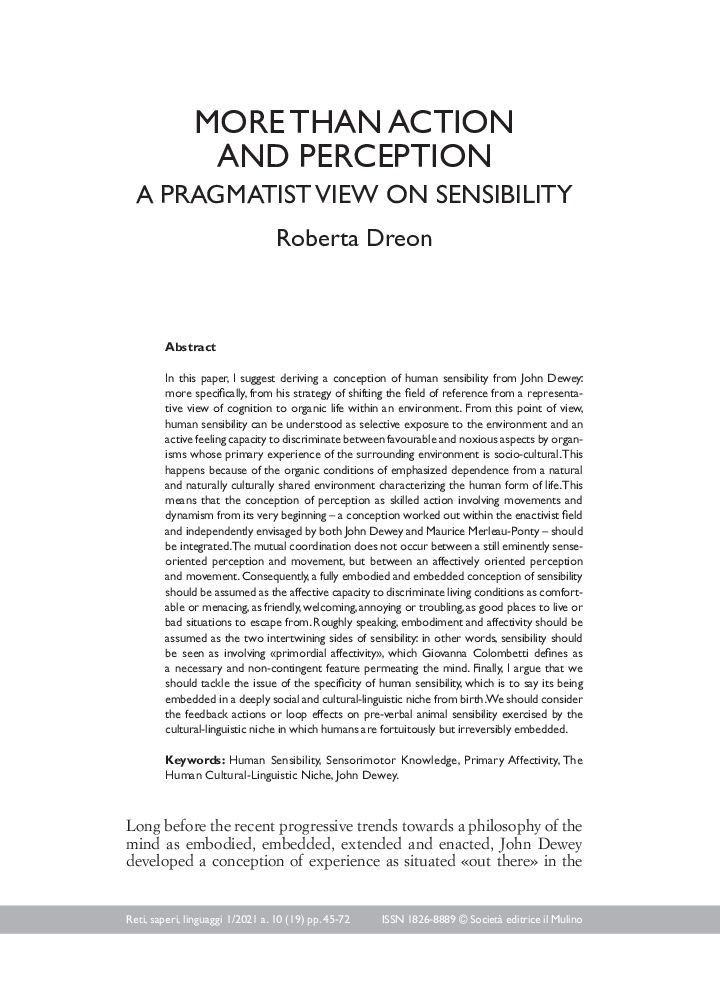