According to international law there is no doubt that enforcement of an ICJ decision is mandatory for the state to which the decision is directed. Within the Italian legal system the obligation to implement decisions of the ICJ, in general, is inferred from Italian constitutional norms. With respect to the methods that could be utilized to implement the ICJ's decision, there appear to be two viable options: a legislative process and a judicial means. Under the first option, the introduction of an "ad hoc" law ordering the annulment of definitive decisions ("res judicata") and compelling the Italian courts to re-open trials in order to implement the ICJ decision does not seem appropriate here. This would put in issue other constitutionally-guaranteed principles, such as respect for the function of the judiciary by the other powers of the state and the right of individuals to judicial protection (Articles 102 and 113 of the Constitution, respectively), as well as the principle of equality before the law and before the courts (Articles 3 and 24 of the Constitution, respectively). A more convincing approach appears the one chosen by Italian parliament, that is, the enactment of a law to introduce, on a more general level, the possibility of re-opening trials in which a final decision has been reached. Before the law was adopted, the Italian courts had to develop creative solutions. This is because the situation is undoubtedly a novel one, with no specific precedents. A Law on the point been adopted, is now the question definitively settled? The answer is negative, in our opinion. We must ask ourselves whether, in this case, the requirement to implement the ruling of the ICJ should defer to the requirement to respect the fundamental values of the Italian legal system, in accordance with the theory of "counter-limits" as developed by the Constitutional Court. According to this theory both customary law and European Union Law, which normally prevail over Italian law (at times, as is the case with customary law, even over constitutional norms) cannot conflict with the fundamental principles of our constitutional system. The theory of counter-limits seems applicable to this particular case: that is, a case involving a demand for compensation for damage caused by heinous crimes, in which there is the real risk that no court will render a decision. The consequence of this would be a violation of Article 24 of the Italian Constitution, which expresses a truly fundamental principle sanctioning the right to a judge. 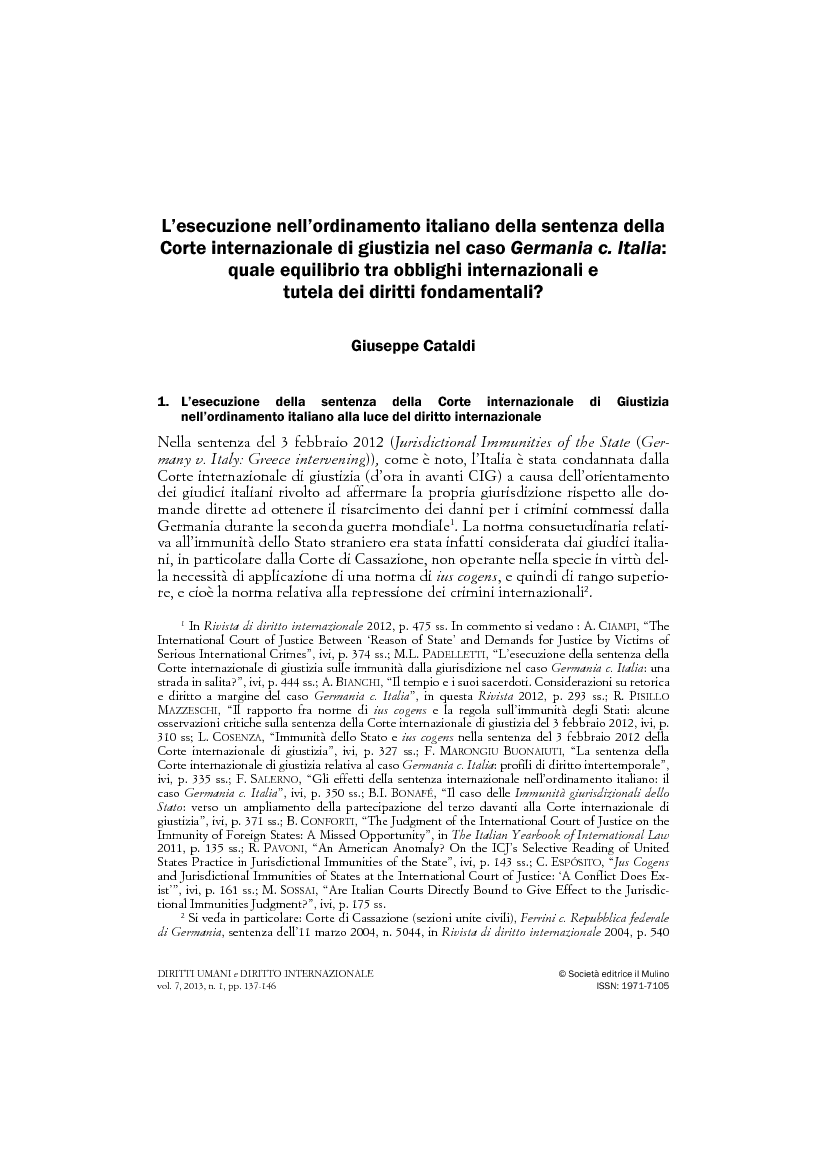