Article 5 of the resolution adopted by the Institute of International Law on Human Rights and Private International Law points to the potential prejudice for an effective right of access to justice likely to ensue from contractual dispute settlement clauses. As noted by the author, while a negative impact of such clauses on the right of access to justice properly intended is likely to arise only in exceptional cases, where the regular course of court proceedings or arbitration at the selected venue would be jeopardized by local circumstances, more concrete is the risk for unevenly conceived forum selection clauses to affect the right to equality of arms between the litigants. Article 5 of the Institute’s resolu-tion refers specifically in this respect to asymmetric clauses, conceived in such terms as to grant to one of the parties a discretion to choose between different available fora. As the author notes, such clauses may be considered as admissible, as it is currently the case pursuant to EU Regulation No. 1215/2012 (Brussels I-bis), insofar as they operate for the benefit of a weaker party, such as in respect of consumer, insurance or employment contracts. Conversely, they may cause concerns in terms of 38 Il profilo è sottolineato da I. BARRIÈRE BROUSSE, ivi, p. 506, notando che mentre per quanto attiene ai criteri di collegamento basati su fattori comuni ai coniugi ovvero ai partenesi questi possono essere adottati nell’accordo di scelta del foro indipendentemente da una parallela scelta di legge, per quanto attiene ai criteri basati su fattori riferiti a uno soltanto di essi, questi in tanto possono acco-gliersi nell’accordo di scelta del foro in quanto siano stati adottati dalle parti in un parallelo accordo di scelta di legge. compatibility with the right to equality of arms when they are resorted to in different contexts, such as that of contracts related to international financial services, in respect of which divergent ap-proaches have been revealed by the courts of different countries. Lastly, the author notes that risks for the principle of equality of arms deriving from an abusive recourse to forum selection clauses might arise also in other fields, pointing to the rules embodied in various EU regulations concerning private international law in family and succession matters, contemplating to a larger or narrower extent the possibility of a choice of court. 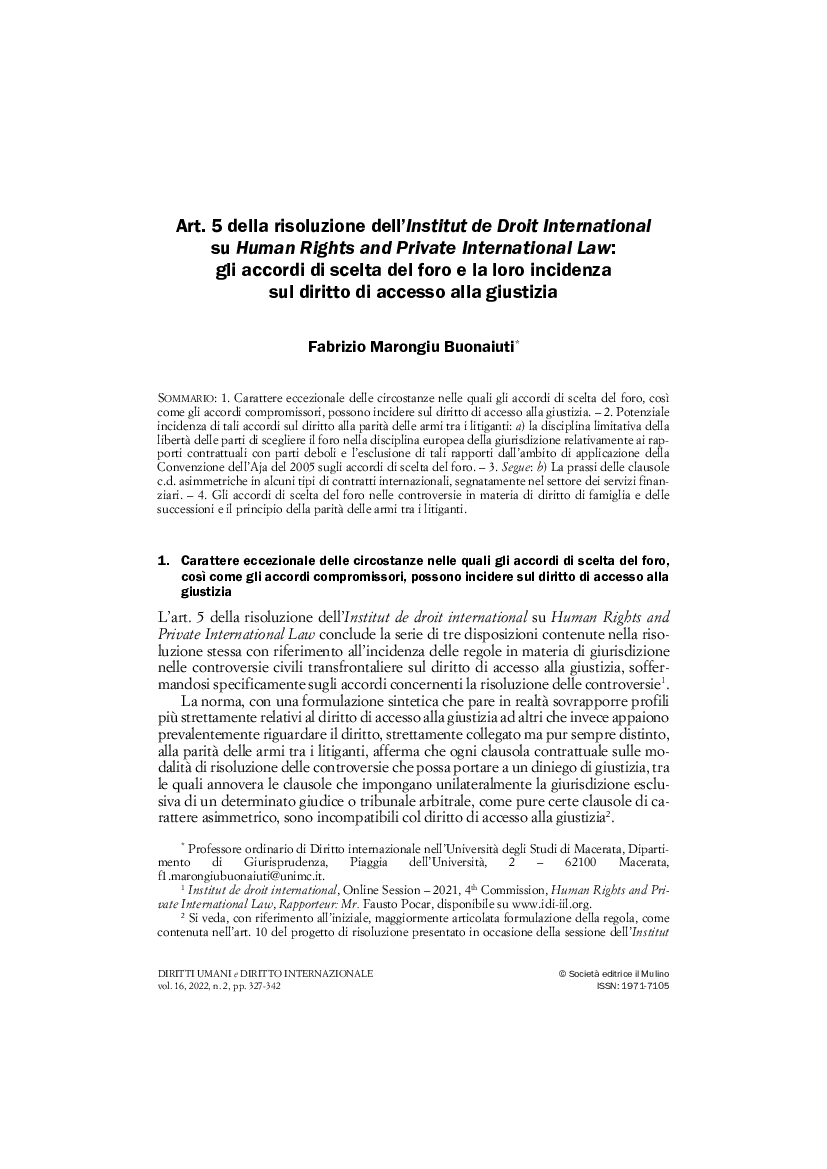